Sundrop Fuels creates the perfected drop-in biofuel: uses any feedstock, generates a low carbon footprint, works in today’s engines and energy infrastructure, and produces by far the highest yield per ton of any biofuels production process. The expanded capability of applying its clean syngas production for other chemicals is an important growth market as well. 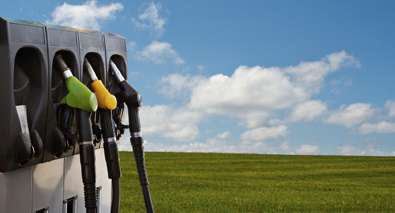 America won’t realize the economic, environmental and cultural benefits of a new energy economy without first establishing a path to energy independence. We believe that the United States’ most pressing clean energy need is not electricity generation – for which there are many new technologies – but for liquid fuel to power the more than 243 million combustion-engine cars, trucks and motorcycles in use today.

The United States alone uses about 134 billion gallons of gasoline each year* – more than the combined usage of Europe, Asia, Africa and South America.  Meanwhile, the United States, like other global economies is increasingly in competition for its energy needs.  Given the nation’s complex but critical goals of achieving energy independence, sustained economic stability and reductions in greenhouse gas emissions, the market is perfect for non-food based, drop-in advanced biofuels.

Two Congressional legislative mandates established the Renewable Fuels Standard (RFS) to kick-start the integration of renewable fuels into our supply chain.  RFS2 requires at least 36 billion gallons annually by the year 2022, including three billion gallons of advanced biofuel by 2016 (such as the “drop-in” renewable gasoline to be produced by Sundrop Fuels) and 21 billion gallons by 2022.

In conjunction with the aggressive goals set by the RFS, Sundrop Fuels sees a long-term opportunity to make ready-to-use, bio-based gasoline, diesel and aviation fuels using an innovative combination of commercially-established and our proprietary high-efficiency technologies that, in concert, create significant economic and environmental advantages over the production of petroleum-based fuels.  In addition in the USA, the rise of low cost natural gas as a cornerstone of America’s energy future has multiplied Sundrop Fuels’ value proposition by providing both a power source and a necessary supplemental source of hydrogen that results in the highest production yield of any other biofuels method. Thus, the use of natural gas in the USA contributes to creating significant additional value to the Sundrop Fuels’ technologies.

The world energy markets are becoming more homogeneous with respect to the need for energy security, lower cost production and reducing the impacts of greenhouse gas emissions. In this respect, biomass rich countries or regions can become production hubs for both their own domestic use but also as regional producers of biofuels and bio-based chemical feedstocks.

World petroleum and other liquid fuels consumption will increase 38% by 2040, spurred by increased demand in the developing Asia and Middle East, according to projections in International Energy Outlook 2014 (IEO2014), released today by the U.S.Energy Information Administration (EIA).”The growth outlook for liquid fuels use will be largely driven by demand in the developing world, especially in Asia and the Middle East,”  “Those two regions combined account for 85% of the total increase in liquid fuels used worldwide over that period.”

World liquid fuels use is projected to grow from 87 million barrels per day (MMbbl/d) in 2010 to 119 MMbbl/d in 2040. The potential for growth in demand for liquid fuels is focused on the emerging economies, in particular China and India, while liquid fuels demand in the United States, Europe, and other regions with well-established oil markets seems to have peaked.

Developing Asia Pacific countries (including China and India) account for 72% of the world increase in liquid fuels consumption.

The large current production of biomass in Southeast Asia from agricultural timber residues, and the potential for purpose grown energy crops, make this region an excellent candidate to begin producing large volumes of biofuels to partially offset the growing need for imported petroleum based fuels.

The global picture for Liquids and Natural Gas shows that between 2010 and 2040 both Europe and Asia will be chronically in need of imports to sustain demand. While Africa will be self-sustaining, a rapid rise in industrial growth and vehicles could also change this demand picture. This situation presents an opportunity for the Sundrop Fuels technology solution. These biomass rich regions have a unique opportunity to harness local biomass resources to help mitigate supply chain shortages as well as enhance their fuels security in an uncertain world. In fact, in Asia, there is an exciting potential to develop a biomass driven fuel and chemical production hub in biomass rich resource areas such as South East Asia. This enables creation of an interregional, integrated market for areas where there is a need for fuels but limited local petroleum or biomass resources.

Sundrop Fuels technology provides for complete flexibility to produce any type of renewable, liquid advanced biofuel, from biobased “green gasoline” to diesel and aviation fuels. These clean “drop-in” biofuels are fully compatible with today’s engines, pipelines and distribution infrastructure. In addition, these biofuels create immediate benefits for both consumers and the environment: A gallon of renewable gasoline contains more than 30 percent more energy value than a gallon of ethanol, while significantly reducing the amount greenhouse gas emissions compared to petroleum fuels.

Our process creates the highest fuel energy yield per ton of biomass of all biofuels processes. Patented Sundrop Fuels BioReforming technology can produce twice as much as conventional gasification processes as well as biochemical-based processes typically used to produce cellulosic ethanol on an energy equivalent basis.

Sundrop Fuels has completed a successful progression of scale-up activities. These include laboratory-scale demonstrations, a pilot plant facility that was operational from 2009 to 2011, and a process demonstration facility now in operation at North Dakota’s Energy and Environmental Research Center.   The company’s next commercial biorefinery fuels plant is current in engineering design stage and planned for completion by 2020.  The production facility will produce more than 200 million gallons of fuel per year.